All about andropause — the male menopause 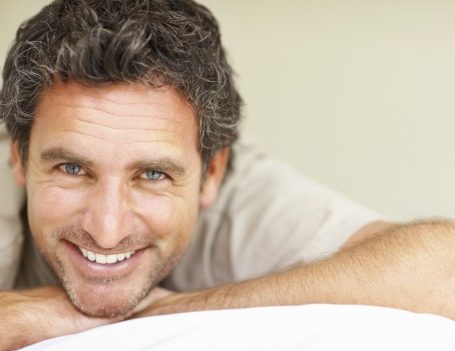 Thanks for joining me for my fifth installment of, “Getting to Know Your Dieting Type.”

Today we’ll be talking about the dieter type of: the andropausal man over forty.

Never heard of andropause? Essentially, it’s the male form of menopause. What do you think causes those mid-life crises? Hormones, of course (amongst other things, but that’s a whole other e-letter entirely…).

It’s important to understand that in the male body, testosterone gradually declines as you age. This hormone is responsible for helping the body in building protein, stamina, and a healthy sex drive. Testosterone also assists metabolic functions such as bone formation and the blood cell production in liver function, bone marrow, and erections.

Testosterone loss is gradual (an approximate loss of 1 to 2 percent per year), but starts early — typically in a man’s early 30s. By the time men reach their early 40s, symptoms of andropause become present, which include:

Since testosterone is a key component in building proteins, it’s essential for you to supplement your diet with an extra helping of amino acids to pick up the slack, specifically branched-chain amino acids (BCAAs). BCAAs are also essential in maintaining and restoring muscle mass, which can be found in both my Amino Booster drink mix and in my convenient A.M. Jump-Start and P.M. Reboot shots.

Additional supplementation can be particularly helpful to this dieter type. Glutamine not only helps banish sugar and alcohol cravings, but also is ideal for insulin resistance. I recommend 500 mg three times a day.

I also recommend carnitine, as it aids in the conversion of fat to muscle. This can often be found in red meat and dairy. I suggest 500 to 1,000 mg of L-carnitine in supplement form, three times a day.

Lastly, an anti-inflammatory supplement is always a good idea to battle against the toxins released after visceral fat cells die. Curcumin is my go-to for this — take 500 mg twice a day. It’s also a smart idea to keep turmeric handy in the kitchen to cook with (curcumin is its active ingredient and makes for some delicious dishes).

A quick story about one of my A-listers — a legendary rap icon you’d definitely recognize. To protect his privacy, I’ll call him Mike.

He came to me two weeks before the Grammy’s, where he’d be going on stage shirtless. To get him into shape for the camera and celeb-studded audience, I put him on a detox, sure to get him the quick results he needed.

I was a little taken aback at Mike’s reaction when I told him the first two days of the plan would be liquids-only. He sat in my office and nearly cried — complaining how he wouldn’t be able to go that long without food. As a pretty macho guy, I would’ve thought he’d be up for the challenge… I reminded him of how all eyes would be on him in a mere two weeks. His tone changed pretty quickly after that.

Mike dug deep, and with a little will power and a positive attitude, he managed to follow the detox without a hitch. He even called me on day three to tell me how shocked he was that he was hardly hungry.

On day seven, he was 10 pounds lighter. And a week after that, he had a killer performance at the Grammy’s. I couldn’t help but grin as he appeared on my TV screen, full of the energy and self-confidence he’d aimed for.

Recipe of the Week

For this dieting type, lean proteins and foods rich in amino acids are essential in maintaining muscle mass and jumpstarting your metabolism. Be sure all proteins are grass-fed, pasture-raised, line-caught, or wild and not injected with hormones.